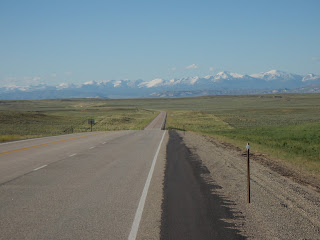 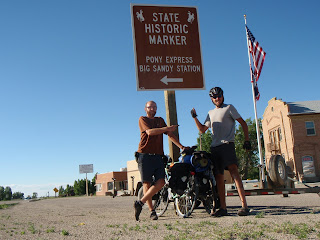 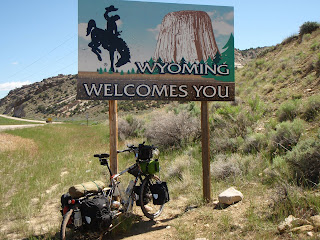 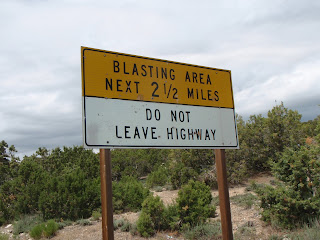 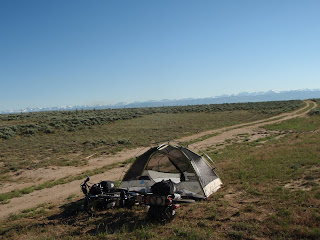 And then there was one

North of Moab we pedaled out onto the Dead Horse Point national park. A narrow peninsula of rock high above the Colorado river where ranchers once corralled wild mustangs. I'd like to think that wild horses refusing to be captured would jump to their death than be enslaved by humans is what gave this finger of land its name, but no, its much crueler than that. The ranchers would often run a group out there, take the best of the bunch and leave the rest to die trapped by a fence across the narrow part of the jetty. Wonderfully retarded.
Onward to the north we ground into a maddening head wind across long barren stretches until reaching Price, UT. We camped there along side some railroad tracks and I filled Hubert's ear about riding through on the freight atop these very tracks years before.
We had breaky that morning in the little old train town of Helper and then climbed up over a 9114 ft pass and were rewarded with a long fantastic descent into Duchesne. Off to the north again was serious cattle country, we just kept on past pasture after pasture being passed by big muddy, "dude" trucks. A local good time was down shifting real quick right along side us to blow a big black cloud of exhaust in our faces.
A man begrudgingly let us pitch our tents on a corner of his land on the out skirts of Roosevelt, where we were later met with a lot of hard stares. By that night we're both happy to be climbing up into some national forrest lands on our way to Flaming Gorge. Storms and blue skies swirled around us for a few days taking turns dumping rain and sunshine. The red rocks stayed with us mixed with clumps of Juniper trees that we watched elk and deer dash between. The wyoming border came and went in its high pretty country and we rolled into the boom town of Rock Springs.
Hubert had been had been playing racquet ball with the idea of giving the Grand Tetons and Yellowstone a miss and basicly heading east from Rock Springs. He was worried about not being able make it Chicago in time to stash his bike and get to his sisters wedding, Which has been his been his priority since cooking up this little summer ride months ago.
So he made the decision to pedal off east, bound for Laramie, Wyoming. Tho first... His mother had given him the gift of a hotel room for his birthday two months ago that he could redeem at any time. He threw it down so we could commemorate our last night together in the laps of rented luxury. We cheersed beers, took advantage of every complimentary thing possible and slept below a roof and above the ground.
40 miles later and hung over the next day we stood at our last crossroad together. We hugged and went or separate directions. Hubert is a good guy and a good friend. I enjoyed traveling with him and will miss him.
Posted by bikegreaseandcoffee at 11:49 AM No comments:

Check out Huberts great pics and words on this business: http://undifferentiatedweirdness.blogspot.com/
Posted by bikegreaseandcoffee at 12:36 PM No comments:

The Journey to Mecca 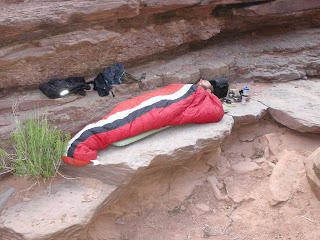 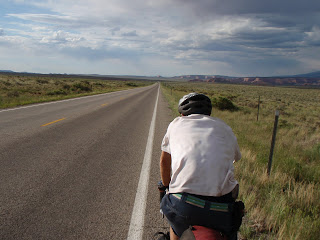 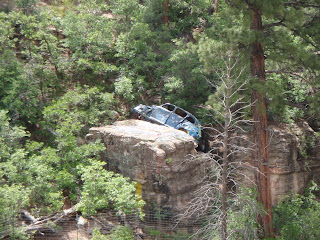 Thanx to the crew at Bikes & Beans in Oak Creek (especially Craig for the crash spot). A great shop with a good cup of coffee.
Sedona was the start to a long slury of red rocks and countless canyons. We got in some good scrambling around Cathedral and Bell rocks and then pedaled up to Flagstaff and out across the sprawling plateaus and crumbling ridges of the Arizonian Navajo Reservation.
The Irishmen and I dropped into the very top end of the Grand Canyon Park at Lee's Ferry and had no problem poaching a campspot on the clear, cold Colorado river. We gave the North Rim a miss, concluding that this was a damnn big canyon in itself and climbed out to drop back down to Page on Lake Powell.
Out and around to the east toward Monument Valley we pedaled a few hundred more miles of Navajo land (Where we we're treated friendlier in villages and spyed with much less speculation when asking for a corner of property to sleep on than in other places).
Monument Valley was Faneffintastic in its disrobed and bold rock scenery. Miles and miles of huge and random craggy spires slowly eroding them selves for the masses. I really did feel like an ant crawling through this enormous Mars like rock garden.
In Mexican Hat, Utah we met Jay a cyclist from New York. He had left the Bay Area about the same time as us and rode across Nevada. We waded in the silty San Juan river, traded travel stories then said good-bye to go our seperate directions.
On we rode trough towns like Blanding and Monticello. We met another Dutch cyclist named Yap, who had just ridden out fron the east coast.
And then One sunny Morning we stumbled into The Mecca. The longer and arduous the journey is all the more to confirm ones faith. I could easily find myself living happily in Moab. Every few places downtown seemed like iether a coffee shop or a bike shop. Everywhere you looked were Mtn. bikes, There are hundreds of miles of legal single track trails and the weather is perfect most of the year long. I now believe the hype and have proven my faith. I willl be back to sample those trails, possibly spin some wrenches and sip coffee from the anodized Grail.

Posted by bikegreaseandcoffee at 10:17 AM No comments: 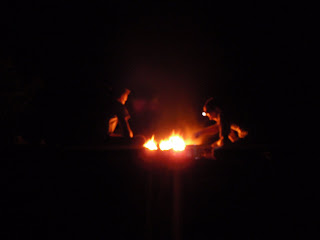 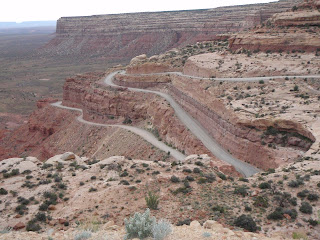 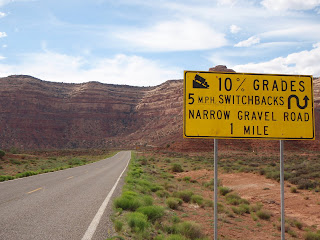 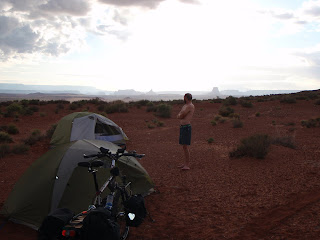 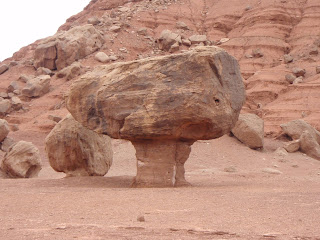 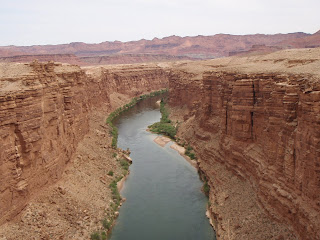 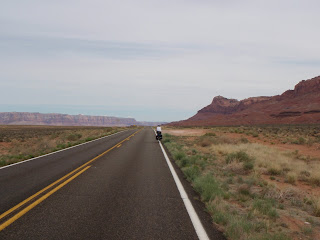 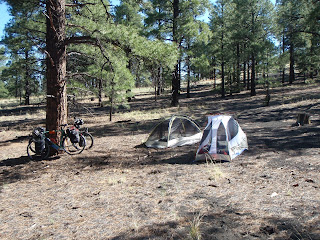 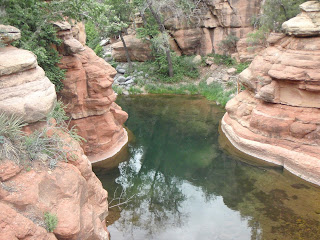 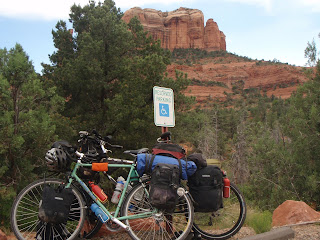 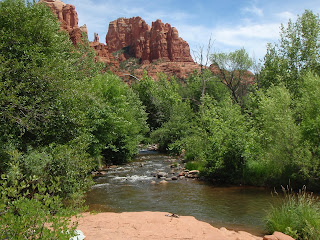 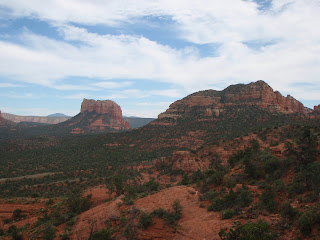 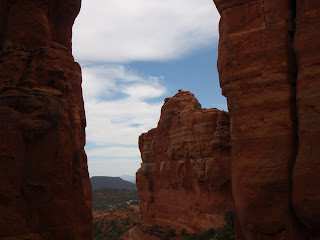 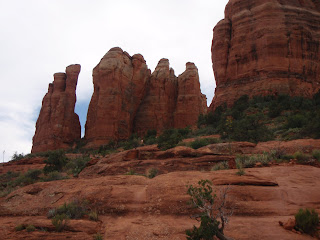 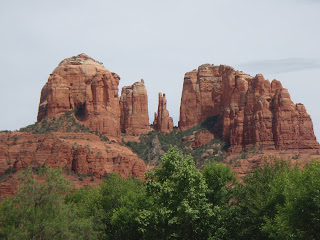 Posted by bikegreaseandcoffee at 1:41 PM 2 comments:

Feeling like wax in the oven we just pedaled across the scorching mojave. Glad to be rid of Barstow we rode out and around to Joshua Tree and 29 palms. We had planned from there to do the 100 mile stretch of open desert to the Arizona border in two days but the lack of shade and the draw of swimming in the colorado river lured us on like cycling zombies. I think I heard a "pssst" like a match being extinguished when Hubert dove into the cool waters that met us in Parker. We swam, swam some more and then went back and swam again before plowing out across the flats of Lapaz county Arizona. In Congress, the extremly nice and talkative Stephanie Martinez invited us into the cool of her home for cokes. Against our own will we did not stay long. The trees, shade and red rock canyons we'd dreaming of were not riding towards us. So we rolled through Prescott, climbed out the other side and got the reward of a 17 mile decent through Jerome and out to Cottonwood. The next morning we reached Sedona and its fantastic scenery.
My mother and her sisters do a once a year reunion and this year just happen to be in Sedona and this week. It was nice to see my mother again and my aunts for the first and last time for a while. Thanx to all of you for the amazing hospitality! Hubert and I after a bit more hiking and swimming are planning to head toward the north rim of the Grand Canyon next. 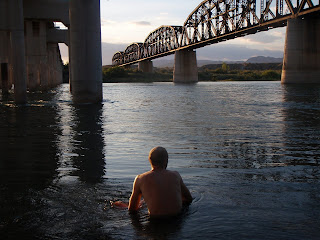 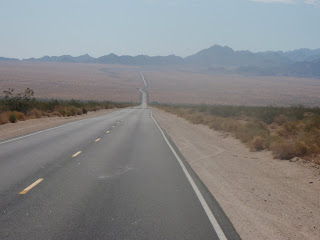 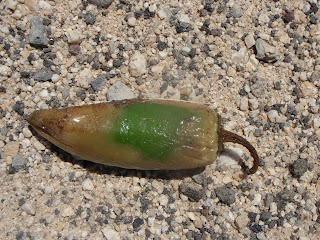 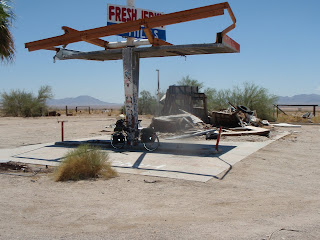 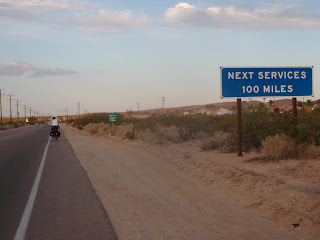 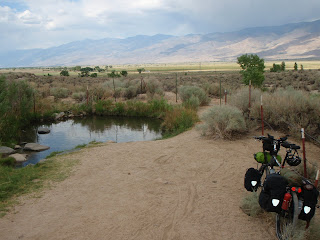 Posted by bikegreaseandcoffee at 11:34 AM 3 comments: