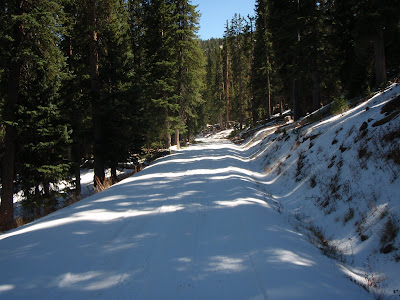 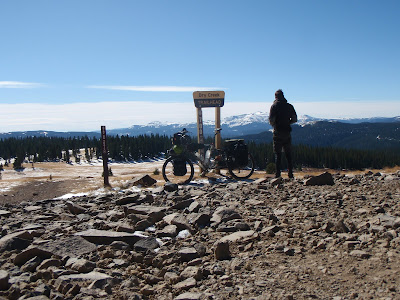 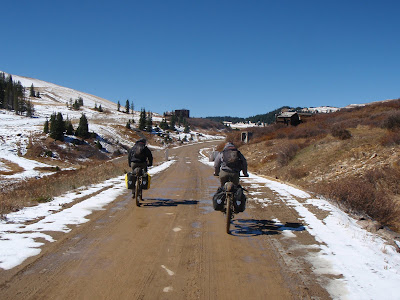 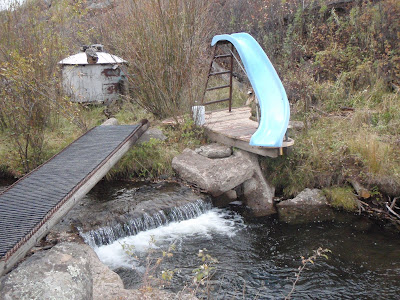 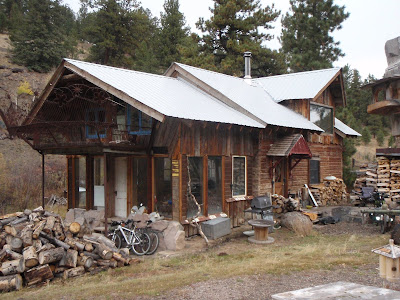 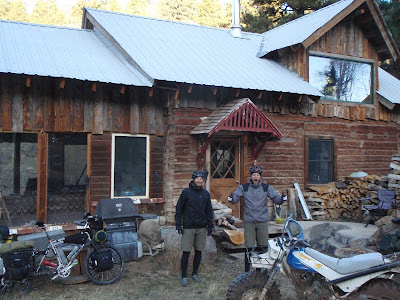 In Salida there is the most Fantastic bike shop called Absolute Bikes. A small museum of bikes and parts hang around on the walls. I could not get myself to leave and just kept wandering around and jabbering on to no one in particular (not even myself). Once again Samu's beastly uniqueness upstaged me and got us invited to stay with Anton and Amber. Anton, Wes and Brenan are mechanics from the shop and all live together out at La Raunch. (Thanx guys for all yer kindness and help. And thank you Amber for the good dinner)
I had lost Matty and Jermey in town somewhere the day before. I think like me they were feeling the winter conditions breathing down their necks and moved on. Man, Salida is such a great town, I really could have stayed a lot longer. But five too many people told me about the storm that was on its way, so begrudgingly I also got pedaling on.
I camped in the grasslands just south from the house/town of Doyleville. I had just gotten on the road that morning when unexpectedly two other Great Divide cyclist rode up. Jake and Duncan were giving themselves 28ish days to ride the GDMBR. (Check out there web action at: bikingforabetterworld.org) With their influence I churned out my biggest off pavement day of 90 miles with two 10,000 ft passes.
In the dark that night with the lights of Del Norte twinkling in the distance, We shook hands and said good-bye. I set up camp and they mashed on.
What a night it turned out to be. I cooked dinner and put my tired self to bed. I had just gotten in a long blink when I was a waked by an angry wind and the tent wall trying to cuddle with me. I jumped up and chased down things that were blowing away and staked down everything I could.
The wind screamed and howled and tried to rip my little tent to shreds. Inside it's relative comfort of machine gun flapping fabric, I though of mountaineers on Everest and tried to sleep knowing how much better off I was. That didn't really work. Even as tired as I was there was no sleep happening. When the first bits of sunlight came over the windy peaks I broke down my camp. I could have para-glided to new mexico with my rain fly but instead I wrestled it into its bag and rode into Del Norte.
Jake and Duncan were in front of the small post office. They had stayed in the town park and hadn't got much sleep either. While we were there David drove up to us and asked us about our trip and then mentioned his "Hippy Cousin had an Um...Cabin". "It is on your way and you could stay in it if you like". We thanked him and though none of us had gotten any sleep to speak of, collectively we still wanted to make some miles that day.
I said good-bye to Jake and Duncan again and went in search of coffee. I sat for a long time sipping coffee and charging batteries. It was later afternoon when I finally got to pedaling out of Del Norte.
I was moving slow and had the thought of Dave's cousin's cabin on my brain but had spaced the directions. Up the road ahead of me was the highest pass on the whole divide route and I was thinking sleep would be better before tackling it. While spying some abandon accommodations a red truck drives up with the last two dudes I expected to be driving it: Jake and Duncan. They had found the cabin and borrowed the truck to go to town for supplies. They gave me directions, insisted there was plenty of room and that they will back in a while.
When I got there I understood Dave's smirk when he originally told us about it. It was odd but odd in the best way. It was excitingly rustic, handbuilt, rigged, improvised and D.I.Yed. The structural log walls had been another cabin somewhere else before but were relocated to this spot. Kevin (the Cousin) had scavenged, found and fabricated all the decks, railings, furniture and art work. If ever I had a dream cabin it would be something sorta like this one.
It was used by Kevin only as a retreat, hobbie and guest house. So, we had this castle to ourselves. I got a fire going and they came back with food and beer!
It snowed on the peaks above us that night but we sat warm in front of the fireplace, talking and sipping cold beer. Ahh man, I slept so good.
When I awoke the storm had passed and the sun was shining. We got an early start and destroyed the 11,910 ft. Indiana pass. It had snowed only a few inches and was easy to plow through.
On the lower slopes of the other side we got a nice mud shellacking but still made 65 miles to Horca.
In the last of the days light we shook hands good-bye again. They had 8 days to catch a plane in El Paso. I watched there lights slowly climb up the next pass, good luck guys.
I
Posted by bikegreaseandcoffee at 11:16 AM