Getting back to business and or taking the SouthWest to dinner

The Snow has thawed! Spring is here! Time to get back in the saddle. Well, I never really got out of the saddle so its more like time to shuck that life sucking thing called a job and kick some rocks! Though there is one more Russian doll to pull the head off of. I've cooked up another side trip! Actually this bit can be considered something of a prologue. A mad dash before the long jaunt. One last kick in the shins before the ship sets sail! One of theses may also help for description: Choke down the appetizer before savoring the main course. Beat the shit out of the screen before knocking gently on the front door. Clapping and crying during the preview before the main feature. Running the bidet on full blast before actually doing the deed. Rowing like hell just before untying the boat.
Ok, So back to the happs. I'm thinkin' about ridin' from Durango back to Chama New Mexico (where I deviated the continental divide route last October) and ride south till Silver City. Then angle West toward the old Mexico and the trailhead of the Arizona Trail. The AZT is 750 miles long and stretches from Mexico to Utah. 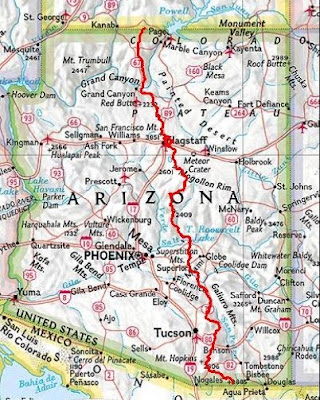 I figured I go and ride that and get back here to Durango for the Ironhorse bicycle festival on May 28th. Then a swap of bikes back to the big ol' beast and pedal to meet Kelly back over in Arizona. Where together we'll resume this around the planet business.
Oh, yea speaking of switching bikes. While in Durango for the winter I built up a single speed 29er mtn. bike. I also took up sewing as a side hobby and made some bags for it. Its what I'm gonna hammer out this next side trip with. A nice little break from the norm to run fast and light. 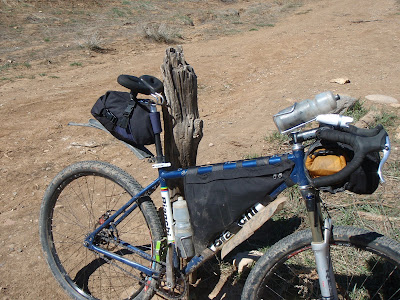 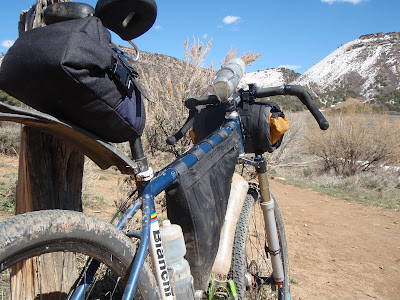 For those of you tooth counting, gain ratio gear geeks. (If I didn't say it I know one of you would ask) I'll be running a double double set up: 34/31 and 20/17
Posted by bikegreaseandcoffee at 9:34 PM