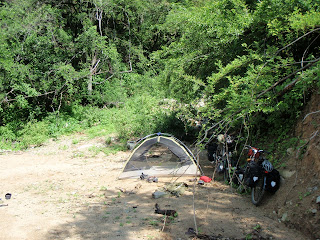 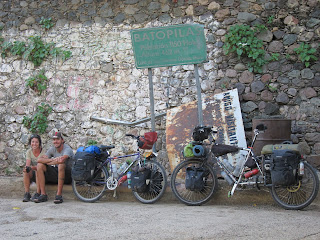 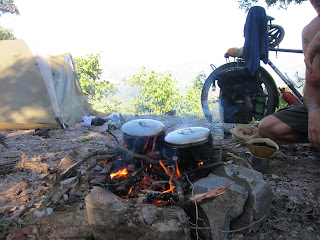 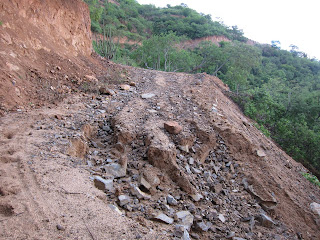 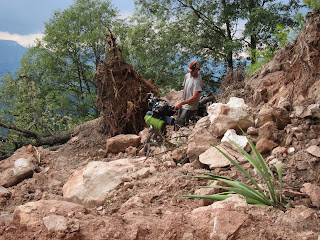 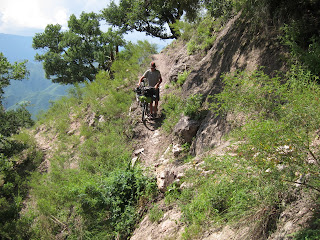 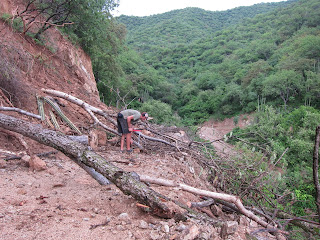 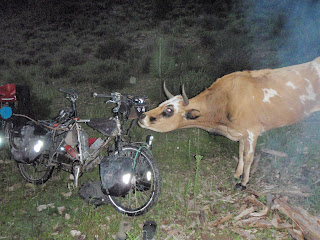 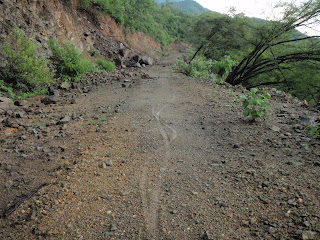 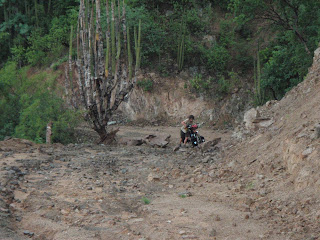 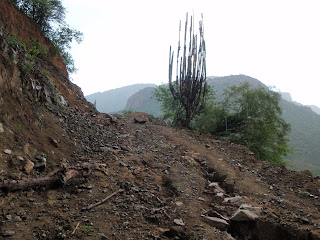 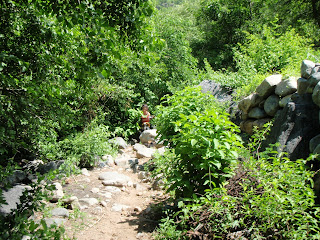 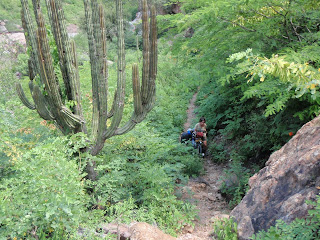 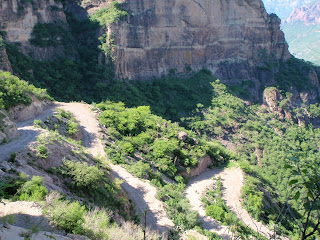 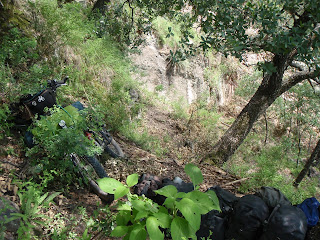 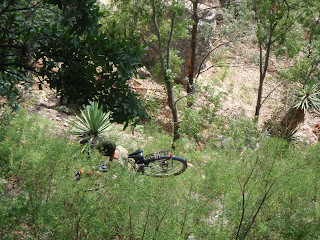 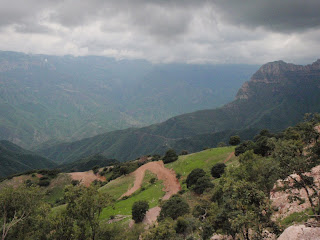 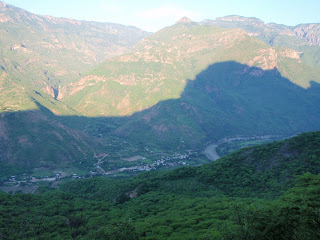 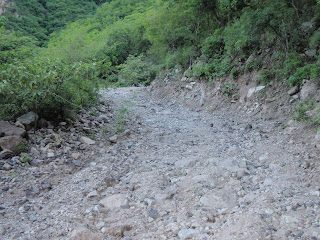 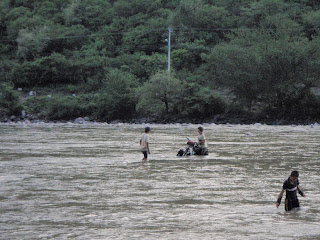 I imagine Johnny Cash saying that it "kicked like a mule and bit like a crocodile" Kelly said that "It was effin ridiculous" and I called it a "Rat bastard son of a trench in the earth". This is all just directed at the wrestling matches and Thunder Dome expierence we had with our bikes and getting them back out of the two deepest sections of the deepest canyon in North America. The expierence was awesome the effort was ass kicking.
We camped a couple of nights at Entre Amigos in Urique. A pretty sweet hostal/campground with a big communal kitchen (where Kelly baked us a delicious cake), concrete swimming pond and all the mangos you can give yerself the shits on! Also the backdrop for the "Old Bolsa in young hands fiasco" (more on that later).
After extracting as much information as possible about a road to Batopilas from Tomas and Luis, our hosts at the Amigos. Kell and I set out.
The road down steam to Guapalina rolled along excellently and was some great off pavement riding. Though in Guapalina we found no sign of the swinging bridge we had been told about and were left to ford the river. At first it was funny that my bike felt so light and basically floated but soon it became a tug of war match to keep from dysfunctionaly kayaking down stream. Word manglers note: Those of you who have seen this river before please bear in mind that it is now monsoon season and running rather high.
Though both of us eventually landed the far shore, Kelly with the awkward help of some local kids. We stared for a moment at the rocky and broken escalator in front of us. Locals just stared at us and chuckled amongst themselves. Up we went. Up the steepest rockies path I've ever had the mispleasure of shoving a heavy bicycle. We grunted, We cussed, We spat but ever slowly heaved upward stummbling and slipping into the night.
In the twilight after the next full day of this crackhead endeavor. We could finally see the canyon rim above us and were fool heartedly excited to feel the road level off some. Just before dark we over took some dudes on horses. They gave us directions, laughed at our gringosity and told us to turn around. We missed the turn. What turn? There was no turn? Well yes, there was a turn... just no road.
In the morning we could see up to where the blasting had stopped coming from the other way. Tomas had told us that the road was not quite finished but it was me that had just not put the 4 and 7 together to realized that it would be in the middle of a steep canyon section. duh.
The local Tarahumara and their goats have installed a faint splatter fest of switchbacks and paths connecting these two points. It was just up to us to conjure the want to shuttle gear and bikes between them.
It was a lot shorter than the shuttle runs Barry the Whale and I had done back in Colorado but it was retardedly steeper. Kelly once again impressed me with how tough she can be and shape shifted into some gear winging mountain goat. We slowly gained ground even though it felt like we slid back as much as we went up. I managed a fantastic butt scoot with my bike on my lap. Sweating and bloody we stood on top. We had done battle and clawed it out the hard way. Kelly threw rocks.
As much as I like to brutalize myself with physically demanding exploits this one mowed the whole birthday cake. I read a blogsite where a female cycle tourist came through on one of these roads also and compared it to the fun of childbirth. The funny thing in our case that really tickles the gag reflex is that after dropping down into Batopilas, a village at the bottom of the second deepest bit of canyon, We basically did the climb all over again.
This time the "road" from Batopilas to Yoquivo connected all the way... it just wasn't driveable. no complaints in the lack of traffic! This climb took us two and a piece of a day. There were uncountable land slides and down trees to pick our way through, all in a grade percentage that rarely left the high teens. It was hard work but really so worth it. The Copper Canyon region has to really be one of the most beautiful places in this part of the world. Remotely rugged with turd stealing views and no limitations on any recreation you wanna partake of!
Man, In just writing this I want to go back. Its amazing how a pit in the earth can really consume you. I had heard and thought of the Copper Canyons for years. Now that I've been there and been humbled and spanked by this massive rock cleavage I wont be forgetting it any time soon.
In getting to Guachochi... (the first real town free and clear of canyon land) Kelly comes out of the first store and says "man, It took all the will power in my body to not eat this donut in the store" I personally would have paid wearing a maple bar mustache.
Posted by bikegreaseandcoffee at 11:54 AM