Sorry to leave ya'll hanging. I know its been quite some time since I've scratched out any travel reports. So this should get us across the gap and back to crawling. Some of these pictures are blurry from swimming with my camera, so don't try to clean that spot on your screen, it wont help.

We had plowed headlong into the Caribbean at Puerto Morelos. We spent a few days on the beach there, camping, swinging in hammocks and fishing, only a short beach skip from town. 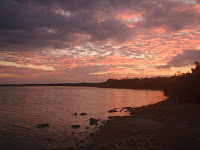 Kelly's Ma, Jane had decided to come and spend here vacation with us. So when it was time, we broke camp and rode up to meet her at a scary yet stupefying "All inclusive" resort. I'm sure we were the first filthy cyclist to crash this gate and begrudgingly be omitted to the inner sanctions of such pomp and splendor. As out of place as I felt I was more than ready to shred the buffet and gallop about in a fuzzy bath robe!

Jane was unfortunately slightly delayed due to storms on the East Coast. Though when she did get in, we spent a really pleasant time Eating!!, resting, drinking and hanging out. I thought I played a good undercover dirtbag, though I did get busted once when the fancy restaurant dress code called me out on my lack of long pants.

At the end of the week we said good-bye to Jane and happily remounted our bikes. With a mad dash through bustling Cancun, we hopped the ferry out to Isla Mujeres. The overly optimistic plan was to catch a passing sailboat out to the Cuban rock. Unfortunately our window of time was small since we were running on the last days of our 180 day Mexico visas. Then further information pretty much closed the window completely. Kelly had talked to a few folks with sailboats possibly going out that way but being that we are Americans no one would even consider giving us a lift. 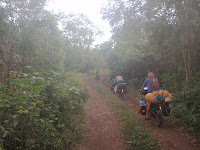 Its not illegal for us to go to Cuba, its just illegal for us to spend money there. That's between us and the U.S. Treasury and we felt they didn't need to know. Some get sniffed out by returning to the U.S. right after a visit to Cuba. An immigration official may find entry and exit stamps from Mexico and no other country's stamps between(Cuba normally won't stamp American passports just the travel visa). Though other things like bureaucracy, strange laws and the infamous embargo also play a fat hand at being pains in the neck bone. If we went out with someone on their boat we could very well not have been allowed off of it. We wanted to see a bit more than the Havana marina. 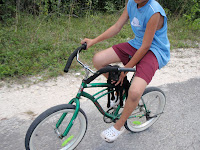 So we let our romantic dreams of hitchhiking to Cuba float away in the Caribbean riptide. We felt better for at least trying. The few days we spent on Isla Mujeres were really quite nice but eventually we sucked it up and headed back to Cancun to catch a flight to Cuba.

We sat down with a Cuban travel agent and started hacking through an itinerary. We knew it was gonna be expensive but as it just kept cha-chinging skyward we began to squirm and scratch our heads. Airfare costs, oversize luggage fees for the bikes, daily insurance charges, visa fees, exit fees, all with peak season upcharges heaped on! We could ride aquatic bikes in one day to Cuba but it started to feel much farther away than that. We were looking at it costing 5 to 6x our average monthly budget for 30 days all said and done. My teeth began to itch. I wanted to go but it started to seem foolish to spend so much on a side trip. In the middle of haggling and debating prices the travel agent throws in that he has a friend that would pay our flight costs for "transporting" goods. (A Cuban midnight express flashed through my brain) Nothing illegal he said, just supplies and things for those in need. Save money and help out by delivering medication or supplies? It seemed like a great option and I actually read of others doing this before. We were all for it but we needed to wait for him to get a hold of his contact. He asked us to check back in a few days when he said he may be able to give us an answer.

We prepared ourselves for a stay in the bowels of Cancun. But first we needed to get our visas extended. 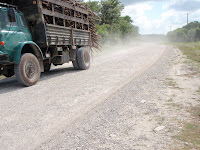 Naively we thought, or just hoped, that we could show up at an immigration office, explain our story and get a few more days tacked on. The immigration office downtown was closed so we rode the busy freeway out to the airport. After lots of explaining and reexplaining we were told "officially" not to worry about it. They said if it's a month or so over that's one thing, but just a few days, its no big thing. So we became illegal immigrants in Mexico.
We rode a long ways north of Cancun and camped for a few nights. Spending a day and night on one of the most quiet and peaceful beaches we had found yet.

Back at the travel agent's, he still had no word for us, he'd gotten no contact from his contact.
We resigned to spend a few more days waiting. We don't use Couch Surfer often but at times it has proved to be a great way to meet people and get a place to crash. Gaspar and Michael were truly fantastic in hooking us up. We stayed for many days running errands and still hoping to get to Cuba without it costing us 7 left arms.

After waiting a week we were no closer. The travel agent still had no word. We'd been stewing, waiting and holding our breath. 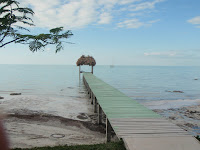 All I wanted to do was get on my bike and ride. Kelly, when looking at a world map, was the first to ring the dinner bell of reason. We had so much in front of us to put ourselves out for such a small distance. We would really be losing sight of the big picture. It would be different if Cuba was our end goal, but we have a lot, lot farther to go.

All that said, it brings us back around to one of my favorite things: We decided to just get on our bikes and keep riding! Cuba my dear, you'll have to wait.

The repulsive crowds and entry fees for the Tulum Mayan ruins had us sneak some peaks over the fence and call it good. As much as we have liked learning about Mayan history and seen the places where these once great civilizations stood, the way they are handled and buried in such tourism, we can't swallow them easily.

The good thing that did come out of our visit to Tulum was meeting a German cyclist named Silke. She has been riding south since the Alaskan panhandle and plans on continuing south to Tierra del Fuego, climbing mountains long the way. At 47 she is a real inspiration and wonderful person to ride with. 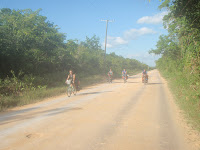 She's a stout legged grandma who constantly crushes a tall gear and seems nowhere near her age.

The 3 of us continued on towards the Belize border together. Unlike the thousands of miles of rural Mexico Kelly and I have ridden, touring cyclist are in no drought along this busy hwy at the end of the country. Our second day with Silke we heaped up with 3 other loaded bikes and riders. One guy from Poland was going the other way but Sara and Evan were pedaling in the same direction as us. They were from Alaska (Minnesota) and were escaping the winter for a while. So 3 became 5. We rode as a swarm for the next several days, searching out great camp spots and talking into the night around fires.

We crossed into Belize, mine and Kelly's first new country in over 6 months. We had no problem leaving Mexico, the immigration official had nothing to say about us being over our visa time!

Corozal was our first Belizan town of girth, though after that we turned onto a fantastic series of dirt backways. Off the beaten path and in small villages we explored the Northern coast and then made our way down to Ladyville. There we said good-by to Sara and Evan. They were bound for a Guatamalan language school. We hope to meet up with them again later!

Silke, Kelly and I plowed the remaining distance to Belize City and right through to the water taxi port. Just in time, jumping aboard the last water taxi out to Caye Caulker that day. Caye Caulker is village on a small island about 25km out in the Caribbean. 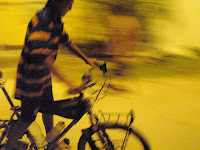 It was this night on this small, carless but crowded island that we got some truly awful news. I went off to check my email quickly while Kelly hung out with some other travelers we had met. I found out then that she had a massive family emergency and needed to get home. With as straight face as possible I got her to a phone so she could hear from her family that she had lost her youngest brother. Never before have I seen someone I love go through so much pain. I don't even have words for what a truly horrific ordeal this has been for her and her family. So I won't say much more about it. You can read the tribute she wrote to him on her page.

The next day we caught a flight up here to New Jersey so she could be home for the funeral. We have been here for a few weeks and leave in a few more. We'll be back to our bikes, trip and Belize soon!
Posted by bikegreaseandcoffee at 2:04 PM