Ladies and Gentleman: The Gila and Um... The Gila? 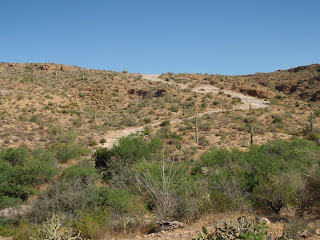 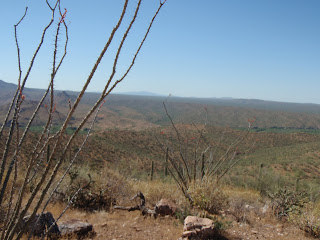 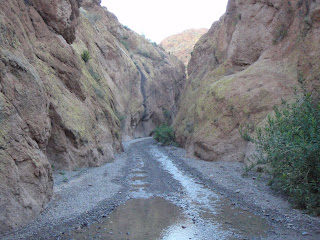 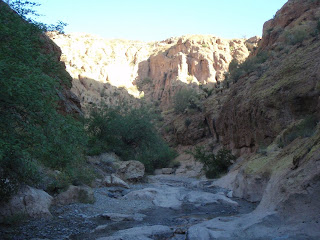 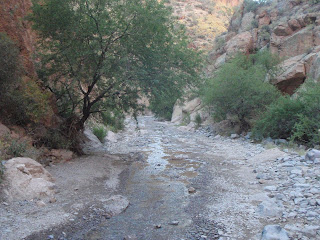 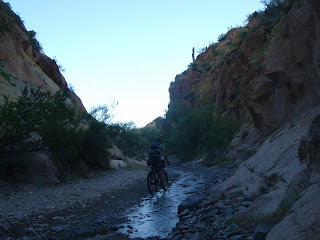 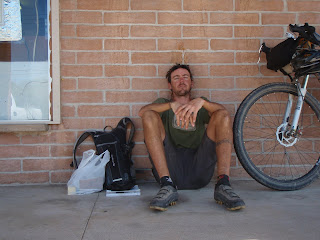 The Saguaros stood guard as a few scorpions and I shared a warm night under a sliver of moon and a staggering dome of stars.
I said good-bye to my friends and got rolling in the sunrise. I had crossed the Gila river the evening before on a small diversion dam. Ahead of me was a box canyon section, fairly famous to ATVs and Jeepers. As far as I knew (by my out dated guide book) was that I pass through the canyon and follow jeep roads north, 20 er so miles to highway 60.


A stream of water came trickling down as I made my way up through the narrow red rock walls. When the gorge opened back out, Jeep tracks went in all directions. All I could think was to follow the most well used looking route as northish as possible. One track led into another into another getting smaller and smaller until I was lost as a fart in the wind. I back tracked a few times trying to make corrections but every time ended up with the same result, scrammbling over sandy, super rocky double track wondering how jeeps even make it through here. By afternoon with the sun overhead I had no idea which way I was even supposed to go anymore.
At the top of one ridge I saw way off in the distance a valley with trees and what looked like a full dirt road paralleling the far side. The closer I got I could see water and grass? Water? a River? The only river out here has to be... THE GILA RIVER! I had just done a huge effin' loop.
As oddly disappointing as it felt, still it was a beautiful tour of the Sonora desert and at least I knew where I was now (sorta).
I picked my way down to the river where the track I was following just stops. Kaput, totally dead ended into some trees 20ft in front of the river. Dry grass spread out from me in either direction up and down stream. I could hear it but I couldn't even see the water through the trees and brush along the bank. I started walking up stream and ofcorse not more than a few feet into the grass the first rattle starts firing off. I jumped out of my skin and back to the open patch around my bike. Well, too sandy/rocky to ride and too snakey to walk. Hum... Taking a moment to pondering my situation and sip my last sip of warm water. A few moments later; Hip-Hop starts blasting from just a short ways down stream. (and just when I thought it was me and the rattlers)
Pushing through the brush and stepping out into the water I could see a couple SUVs on the far bank. The water was swift moving and brown but looked shallow enough to cross. Though I rather quickly found myself nipple deep and making much better sideways progress than I wanted. For a second I thought I was gonna be swimming for it and clawing at the brush on the far side. But luckly thats as deep as it got and I stumbbled through on my feet.
No sooner was I dripping on the beach mumbling that I'm mountain biking and lost than I was sitting in a lawn chair eating a BLT and sipping a cold drink.(I'll have to get lost more often)
Debbie, her teenage son and her son's two friends were out camping for the weekend. We chatted for a while but they were still in the midst of setting up camp and digging the amenities. So I sloshed back to get my bike.
Another bonus to a frame bag is a good spot to support your bike while you balance it on your head during deeper river crossings!
I got out my water filter and went to get water out of the river but Debbie wouldn't hear of it and gave me two small bottles of water. Soon after I thanked them all for the lunch and water and pushed on.
The two bottles of water went quick and the road I thought would just parallel the river turned away into the heat of the desert. I could ride some bits but mostly I had to push through soft sand in and out of dry arroyos.
At the remains of an old ranch I went to check the windmill. Thinking that by some chance there might be water in one of the tanks. It looked like I was about 20 years too late for that.
After sitting down in the shade to once again ponder my situation... thats when a truck drove up. The words from the woman driving were: "If your trying to get water from that old windmill you could probably use a ride"
She lived in Florence and had brought her dogs out to the river. I though it was odd and uncanny but she said she just put the two and two together when she saw me turn in there. Florence was in the wrong direction of the way I was actually trying to go but I saw a cup of coffee and a shaded park in my near future.
Posted by bikegreaseandcoffee at 9:08 PM